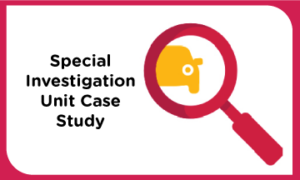 Insurance fraud is a crime that increases the cost of insurance for all drivers. Maryland Auto works every day to combat insurance fraud through coordination between our Claims professionals and our Special Investigations Unit (SIU).

According to the Coalition Against Insurance Fraud, 8,898 motor vehicles were intentionally set on fire in the United States in 2020. Maryland was also ranked sixth on a list of the worst states for auto-related fraud in 2021 by Clearsurance, an insurance comparison website.

This case began when our policyholder’s vehicle went missing and was later recovered after being burned. The policyholder advised Maryland Auto that she had parked and locked the insured vehicle in a secure location behind her sister’s house. She returned a few hours later to find her car missing.

When the policyholder contacted Maryland Auto to report the claim, she indicated that she had already reported the vehicle theft to the police, who entered the vehicle identification number (VIN) into the National Crime Information Center (NCIC) system. As a part of the claims process, the Maryland Auto adjuster reviewed the NCIC system report about the insured vehicle, which showed that the car had been recovered.

Shortly afterward, the adjuster was contacted by the police department and was advised that the insured vehicle was found burned in the middle of a field. The police stated that they also spoke with our policyholder, who, despite not seeing the condition of her car, told them they could do whatever they wanted with the car and that she wasn’t going to pay to have it towed. The officer also told our claims adjuster that the policyholder was uncooperative on several matters and recommended we involve our SIU team to investigate further.

The SIU investigation produced several suspicious fraud indicators, or “red flags,” regarding the details of the theft. When asked, the insured stated that she found no broken glass where she parked her vehicle. She also wasn’t sure if she had locked her doors. The policyholder told the claim adjuster that she held the only key to the car.

This particular vehicle is equipped with a transponder key that prevents the engine from starting unless that key is present. The police found the car in the middle of a muddy field, 40 yards off the roadway. A tow truck attempted to retrieve the car that evening but was unable to, based on the condition of the area. This substantiated that the vehicle was not towed to that location but was driven there, which would have required the transponder key.

As part of the investigation, the SIU investigator requested prior vehicle maintenance records. The policyholder provided several, which included notes from the mechanic that several components had oil leaks and engine noise. One report also reflected previous body damage to the car.

In the course of the investigation, it was also discovered that several people at the location of the alleged theft were gathered, eating and talking for hours in full view of the parking area. However, none saw or heard anything regarding a vehicle parked 15 to 20 feet away.

The policyholder added a new vehicle to her policy within 24 hours of her car being reported missing. She still had no idea of the condition of her stolen vehicle when the police found it, yet she went out and purchased a new one anyway.

To clarify the circumstance of the insured vehicle’s disappearance and recovery in a burned state, Maryland Auto requested an Examination Under Oath (EUO) from the policyholder.

During the EUO, the SIU adjuster verified with the policyholder that she only had one key, which was always with her. When asked if the vehicle was a push-to-start or required the key to be inserted into the ignition, she couldn’t remember, despite owning the vehicle for almost four years.

The policyholder was unfamiliar with transponder key technology. The insured could not explain how someone could have operated the insured vehicle to drive to a location just 15 minutes from the reported theft location, when she possessed the sole transponder key, even after the SIU team member explained that the keys’ microchips were necessary to operate the ignition and start the vehicle.

Ultimately the claim was denied for questionable facts and lack of evidence of a theft occurrence.

Insurance fraud is a serious matter. Learn more in this video from the Maryland Insurance Administration: